Phragmites australis is a tall grass species with origins in Europe believed to be introduced to Canada in the late 1800s. In Ontario, there is also a native species of Phragmites found in similar habitats however it grows in balance with other native vegetation and must be protected as part of any management plans.

The aggressive invasive Phragmites began being monitored by biologists in the wetlands of Long Point over 20 years ago. Since then, the growth and spread of this species at Long Point has been exponential.

Phragmites is an aggressive invader, growing up to 6 metres in height, crowding out native vegetation and reducing biodiversity by producing dense monoculture stands. These stands impact native species, especially Species at Risk, since they provide poor habitat and food for wildlife, and impede the ecosystem from functioning as normal.

The impact of invasive Phragmites on these ecosystems has a direct impact on people too, says Eric Cleland, Director of the Invasive Species Program for the Ontario region at the Nature Conservancy of Canada, “invasive Phragmites can impact critical items in our daily lives like infrastructure, property values, and agricultural productivity, along with the recreational and environmental values that make the Priority Place so important.”

Phragmites can be exceptionally tricky to remove once it’s become established in an area due to its deep root system and fast spread, but targeting this invasive species is an important task to make sure our wetlands and ecosystems are healthy and functioning.

In 2015, NCC and MNRF spearheaded a gathering of stakeholders: “the presentations and discussions that took place during that gathering formed the groundwork for a coordinated control effort in the Long Point region. This day led to the creation of the Long Point Phragmites Action Alliance,” says Cleland.

This collaborative is made up of 29 partnering organizations which include all levels of government, environmental control groups, and local landowners with interests in conserving and managing the diverse wetland habitat within the Long Point region.

“It’s critically important to work collaboratively to ensure no populations are left behind,” says Cleland, “If one area is left untreated, Phragmites can rapidly re-invade, jeopardizing the whole program. Control at a landscape scale is only feasible where landowners and organizations work together to pool funds, labour, skills, and equipment.”

According to Heather Braun, Habitat biologist at CWS, the leadership of the MNRF and NCC has been the key to the success of this program. “The province and NCC have built a program that has gained community support and is resulting in positive changes for wildlife and SAR.  We have a goal to manage 90% of the Phragmites in the Priority Place, and I am confident that together we can achieve that goal.”

While this work is ongoing, these groups can be proud of what they’ve accomplished so far. Since 2016, over 1,400 hectares in the Long Point area have undergone invasive Phragmites control in a multi-phase strategy. Despite Covid-19 this work is slated to continue and build in 2021, largely through the Phragmites Working Group, with funding from the Canadian Wildlife Service, MNRF, US Fish and Wildlife Service and several other private supporters. 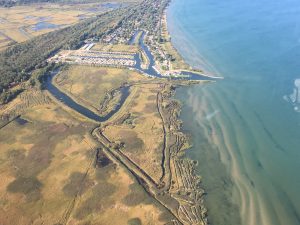 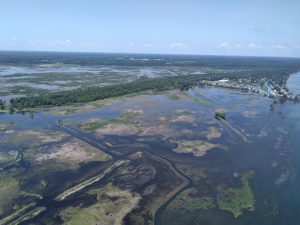 The Phragmites management program was initiated in the wetlands of Long Point but has since spread into the upper watersheds. In 2019, a subcommittee of the LPPAA developed an implementation plan for the entire Big Creek Watershed focused on engaging landowners and helping to provide them with control services for their properties.

The Big Creek Watershed Control Implementation Plan divides the watershed into 8 sections or “phases”. Since it’s inception it has been well received, enrolling over 200 parcels and completing control work on over 75 parcels of land with no sign of slowing down.

“Landowners are an important part of Phragmites control for two reasons,” says Brett Norman, Invasive Species Program Coordinator at Nature Conservancy of Canada. “For one, landowners can provide access for control of Phragmites on their properties. This ensures that their property is not a seed source for future infestations. Two, landowners can help pass on information. Many people don’t know what
Phragmites is, why it’s bad, or that control services exist. We invest a lot of time working with landowners to ensure they are aware of the issues.”

This program allows landowners to tap into the resources needed to target Phragmites, including professional contractor services, specialized equipment, and aquatic herbicides where applicable.

“These services are provided free of charge, allowing landowners to address an issue on their properties that they may otherwise not have the capability to do,” says Norman.

The program is now open to anyone who owns land in Norfolk County. Landowners wishing to join the program can do so by emailing the LPPAA at bigcreekphrag@gmail.com or by visiting our website at www.longpointphragmites.ca.

Organizations in the Long Point area have adopted an integrated approach to Phragmites management involving a wide range of methods, each one required to deal with special circumstances, in an effort to eradicate Phragmites and protect our wetlands.

“An aquatic herbicide is used in the Long Point region under a special permission from Health Canada; this unique tool is not available anywhere else in Canada. Long Point was chosen to pilot this method due to the imminent impacts to wildlife, in particular Species at Risk. An urgent response was required, and aquatic herbicide were chosen because it is the most effective method of control for large scale applications,” says Eric Cleland of NCC.

Additional measures, such as rolling, cutting, burning or even a combination of these are often necessary to fully eradicate this aggressive species as part of an integrated pest management program (IPM).

Cleland notes that they’re always on the lookout for new control methods. “It’s always important. New methods can help reduce the impacts of control, show improved results for people and the environment, and reduce management costs.”

Biocontrol is not necessarily a new method, but it’s one that’s gaining traction and being investigated for use in the area. It involves introducing a natural enemy of an invasive species to re-establish a natural balance.

“One of the best examples of a successful biocontrol in Ontario is for Purple Loosestrife, where the release of European leaf-eating beetles achieved wide-scale control,” explains Cleland. “The beetles are natural enemies of purple loosestrife, and they feed primarily on the plant. This biological control of purple loosestrife can reduce populations by up to 90 per cent and allow native plants to re-establish.”

Building on over 20 years of research in the area, two moth species which are natural predators of invasive Phragmites have been found to be promising biocontrol agents. They pose a minimal risk to native species and if successful could offer an additional tool to control Phragmites as part of an IPM.

While no single method can rid our wetlands of invasive Phragmites, it’s exciting to see the ongoing research and work being done by dedicated organizations to help mitigate its impact.